Difference between revisions of "e-puck2"

This is the overall communication schema:

Installation of the e-puck2 environment

Some programs are needed to program the e-puck2.

1. The path to the Eclipse_e-puck2 folder must contain zero space.

This part concerns only the users of a Windows version older than Windows 10. The drivers are automatically installed with Windows 10.

Note : The drivers installed are located in C:\Users\"your_user_name"\usb_driver

This section can be ignored if Java is already installed on your computer.
To verify whether it is installed or not you can type the following command into a terminal window:

If Java is installed, you will get some information about it, otherwise the command will be unknown.
You need to have Java 1.8.xxxx listed to be able to run Eclipse_e-puck2.

Type the following commands in a terminal session to install Java SDK:

Note : The icon of the Eclipse_e-puck2 executable will appear after the first launch of the program.

3. The file’s structure in the Eclipse_e-puck2 folder must remain the same. It means no file inside this folder must be moved to another place.

In order to let Eclipse (or any program ran by you) to access the serial ports, a little configuration is needed.

Type the following command in a terminal session. Once done, you need to log off to let the change take effect.

You need to have Java SE 8 listed to be able to run Eclipse_e-puck2.

1. Go to the Java download page and download the Mac OS X Java 8 SE Development Kit. It is the .dmg file without the Demos and Samples.

2. Open the .dmg file downloaded, run the installer and follow the instructions to proceed with the installation of Java SDK. 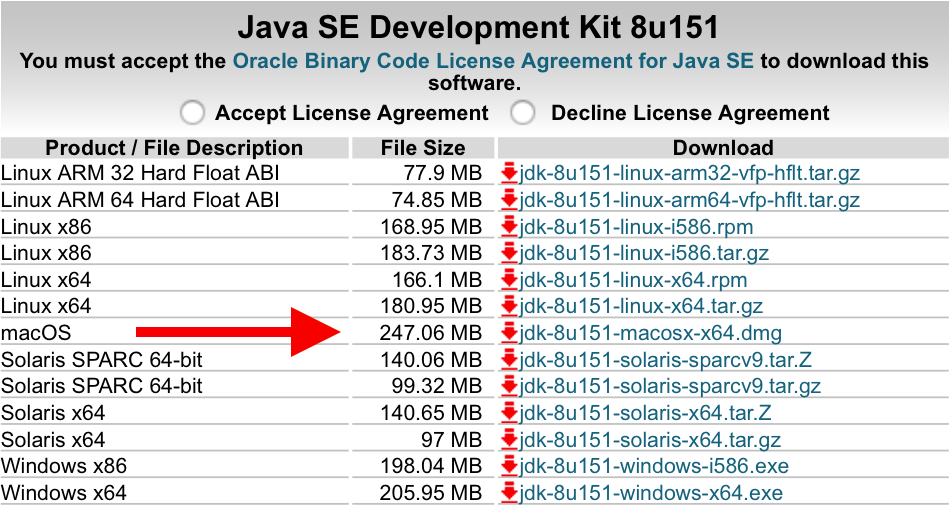 Note : You can place the Eclipse_e-puck2.app anywhere, as long as the full path to it doesn’t contain any space, if you don’t want it to be in Applications.

3. You can create an Alias to Eclipse_e-puck2.app and place it anywhere if you want.

It’s very likely that Gatekeeper (one of the protections of Mac OS) will prevent you to launch Eclipse_e-puck2.app because it isn’t signed from a known developer.
If you can’t run the program because of a warning of the system, press OK and try to launch it by right clicking on it and choosing open in the contextual menu (may be slow to open the first time).
If Unable to open "Eclipse_e-puck2.app" because this app comes from an unidentified developer. or if "Eclipse.app" is corrupted and cannot be opened. You should place this item in the Trash. appears after executing the app the first time, it is needed to disable temporarily Gatekeeper.

1. Go to System Preferences->security and privacy->General and authorize downloaded application from Anywhere. 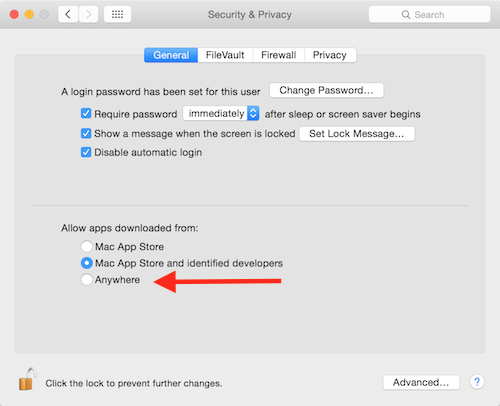 If you are on Mac OS Sierra or greater (greater or equal to Mac OS 10.12), you must type the following command on the terminal to make the option above appear.

2. Now you can try to run the application and it should work.
3. If Eclipse opened successfully, it is time to reactivate Gatekeeper. Simply set back the setting of Gatekeeper.

For the ones who needed to type a command to disable Gatekeeper, here is the command to reactivate it.

This procedure is only needed the first time. After that Gatekeeper will remember your choice to let run this application and will not bother you anymore, as long as you use this application. If you re-download it, you will have to redo the procedure for Gatekeeper.

1. The path to the Eclipse_e-puck2.app must contain zero space.

2. The file’s structure in the Eclipse_e-puck2.app must remain the same. It means no file inside this app must be moved to another place.

Meaning of the LEDs

The e-puck2 has three groups of LEDs that are not controllable by the user. 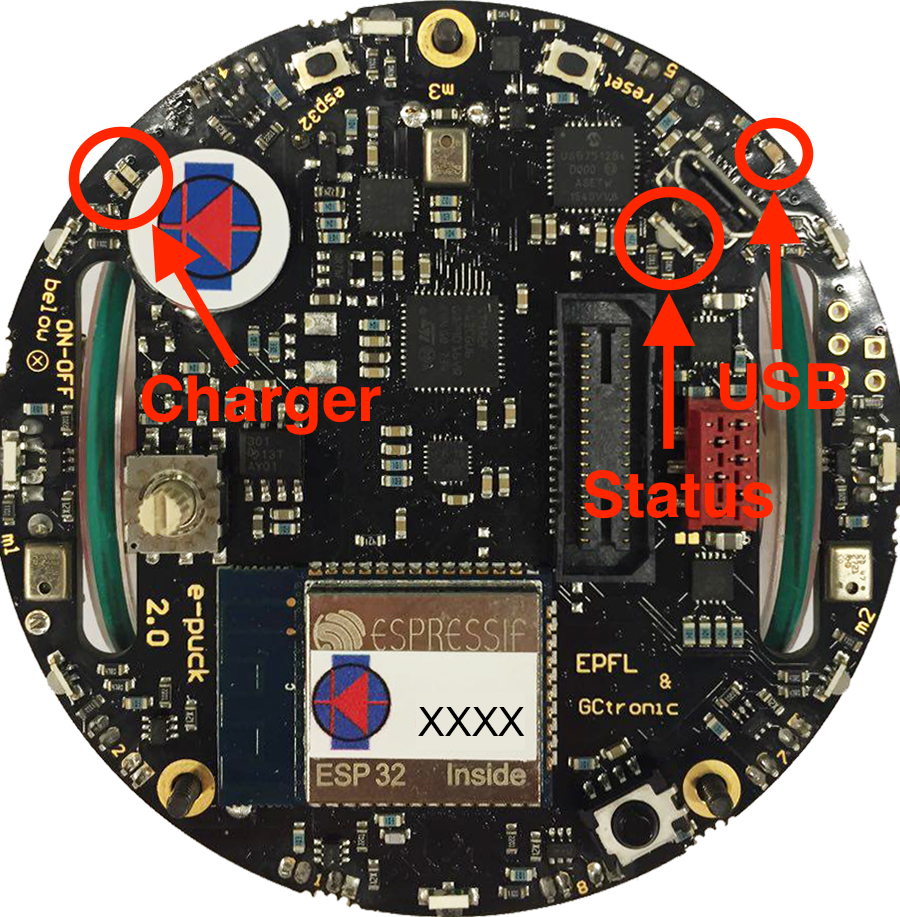 Top view of the e-puck2

The robot is automatically turned OFF if the system's tension gets below 3.2V during 10 seconds.

Two ports are created by the e-puck2's programmer when the USB cable is connected to the robot (even if the robot is turned off):

A third port could be available depending on the code inside the e-puck2's microcontroller. With the standard firmware a port named e-puck2 STM32F407 is created.

1. Open a terminal window (ctrl+alt+t) and enter the following command.
2. Look for ttyACM0 and ttyACM1 in the generated list, which are respectively e-puck2 GDB Server and e-puck2 Serial Monitor.

1. Open a terminal window and enter the following command.
2. Look for two cu.usbmodemXXXX, where XXXX is the number attributed by your computer. You should find two names, more or less following in the numbering, which are respectively e-puck2 GDB Server and e-puck2 Serial Monitor.

Note : Virtual serial port numbering on Mac depends on the physical USB port used and the device. If you want to keep the same names, you must connect to the same USB port each time.

e-puck2_main-processor is a demo project containing all the libraries written for the e-puck2.
It shows how to use them and can be interfaced with e-puck2 monitor.
But this project can also be used as a library to build your own project on top of it.


To accomplish that, you have to copy the folder Project_template, contained in the e-puck2_main-processor project, where you want to place your project.


Then all you need to do is to edit the makefile to set the name of your project, the path to the e-puck2_main-processor project, the .c files to include and the folder(s) to the .h files to include.
All the .h files located next to the makefile are automatically included in the compilation. But if you need to place them into folders, you have to specify these folders in the makefile. This makefile uses the main makefile of the e-puck2_main-processor project. This means you can add custom commands to the makefile but it should not interfere with the main makefile.

The result of the compilation will appear in a build folder in your project folder.

Eclipse_e-puck2 contains everything needed to compile, program and debug the e-puck2.
The only settings to configure with a new project are located under the Debug Configurations tab of Eclipse (you can also find it on Run->Debug Configurations).

Once in the settings, select Blackmagic Probe preset on the left panel. Then you need to configure two things :

If you want to debug another project, you can change the settings of the Blackmagic Probe preset or copy it into another preset and configure this one in order to have one preset by project. Now you should be able to use the debugger with Eclipse.

Connecting to the bluetooth

The default firmware in the ESP32, the module which provides Bluetooth and Wi-Fi connectivity, creates 3 Bluetooth channels using the RFcomm protocol.
It means that when you pair your computer with the e-puck2, 3 com ports will appear. Which are :

xxxxx being the ID number of your e-puck2.

By default, the e-puck2 is not visible when you search for it in the bluetooth utility of your computer.
To make it visible, it is necessary to hold the USER button (also labelled as "esp32" on the electronic card) while turning on the robot with the ON/OFF button.
Then it will be discoverable and you will be able to pair with it. Note that on certain Windows, a prompt will ask you to confirm that the number written on the screen is the same on the e-puck. just ignore this and accept.

The PATH variable is a environment variable used to store a list of the paths to the folders containing the executables we can run in a terminal with Windows, Mac and Linux.

If you want to use the arm-none-eabi toolchain provided inside the Eclipse_e-puck2 package, you have to add it to the PATH variable to be able to call it inside a terminal window.

Setting the PATH variable for Windows :

Setting the PATH variable for Linux :

Setting the PATH variable for Mac :

What is important to know is that this procedure is temporary. It applies only to the terminal window used to type it. If you open a new terminal window or close this one, you will have to set again the PATH variable.

Note : The arm-none-eabi version can differ from the one given in this example. It could be needed to adapt the path to the correct version.

The on-board programmer of the e-puck2 is based on the Blackmagic probe open source project firmware.
Some functionalities has been added on top of the original project to be able to control some functions of the robot, for example the power on or power off.

To access to the available commands of the programmer, it is needed to connect to the programmer with a GDB console.
To do so, you have to type the following command in a terminal window with the com port used by the 'e-puck2 GDB Server port of your e-puck2 :

Once connected to the programmer with GDB, you can type

or to print the available commands of the programmer.


The choice made for the mode is the only setting that is stored in a flash zone of the programmer, which means the choice is remembered, even if the robot is completely turned off.

Note : in mode 1 and 3, GDB can be used over the bluetooth connection of the e-puck2. But is is much slower than with USB and it doesn't work with Windows due to GDB limitations on this OS.

By being connected with GDB, you can also use the standard GDB command to program and debug the main processor of the e-puck2.

To put the e-puck2 into DFU, it is needed to turn it on while keeping pressed the "407 boot" button located under the electronic card on the left side of the robot.
The robot will appear as "STM32 BOOTLOADER" in the USB devices.

Once in DFU, you can program it with dfu-util using the following command :

See the manual page of dfu-util for further information on how to use it.

Note 2 : It is also possible to put the programmer in DFU by contacting two pinholes together while turning ON the robot.
It is used to update the firmware of the programmer.
The two pin holes are located near the USB connector of the e-puck2, see the photo below. 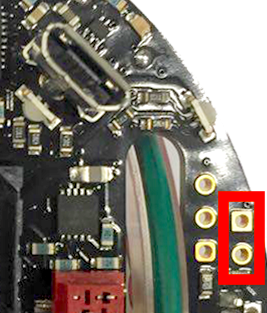 Location of the pin holes to put the programmer into DFU 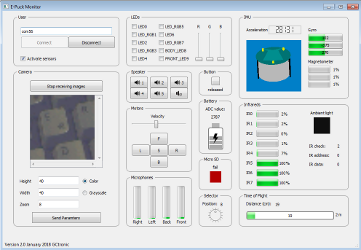 An interface running on a computer and connecting to the e-puck2 either through Bluetooth (selector position 3) or via USB (selector position 8) based on the advanced sercom protocol was developed; from this interface it's possible to have information about all the sensors, receive camera images and control the leds and motors. The source code is available from the repository https://github.com/e-puck2/monitor. Available executables:

The robot is initially programmed with a firmware that includes many demos that could be started based on the selector position:

The full code is available in the git repo https://github.com/e-puck2/e-puck2_main-processor.
The pre-built firmware is available here e-puck2 firmware.